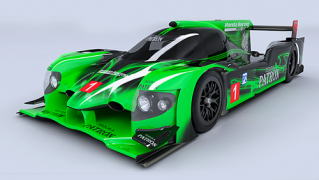 The Tequila Patron ESM team will be taking on its first full season in the FIA WEC, with drivers Scott Sharp, Ed Brown, Ryan Dalziel and Johannes van Overbeek. The Florida-based team will be taking on some of the world’s best as they race around the globe at events such as the historic and prestigious 24 Hours of Le Mans, the Six hours of Spa-Francorchamps and the inaugural Six hours of Nurburgring.

“I look forward to joining ESM as they take on their first full season in the FIA WEC, and to be returning to that series,” expressed PDS Owner Lee Szczypski. “It will also be great to reunite with Ryan Dalziel, engineer Steve Challis, and our gearbox specialist, Noel Flannery, who I worked with on the LMP2 Championship and 24 Hours of Le Mans winning Starworks Motorsports team in 2012. They were part of a great combination of people that finished on the podium in all but one race that season with the HPD ARX-03b.

“I know that it will be a challenging year, as it will be ESM’s first in the WEC and we will be fielding two brand new HPD coupes, but it’s an opportunity I wouldn’t want to miss out on.”

The association with ESM also continues PDS’ long relationship with Honda Performance Development. The history between PDS and HPD goes back to Szczypski’s days working in the IndyCar series, which was followed by contracts with Starworks Motorsports (HPD ARX-03b), Level 5 Motorsports (HPD ARX-03b) and the DP entry for Honda with Starworks last season.

Click here for more on ESM’s entry into the FIA WEC.