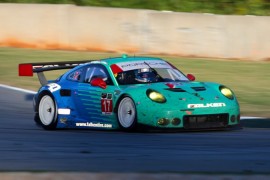 One of Performance Data Solutions’ clients have confirmed their plans for the 2015 season with Team Falken Tire confirming to RACER that they will be returning to the TUDOR United SportsCar Championship next season.

The Indianapolis-based squad is also searching for additional sponsor partners in order to expand to a two-car program.

The team scored their first win in the new series at the season ending Petit Le Mans less than two weeks ago.

For more on what Team Principal Derrick had to say in this RACER.com article click here.