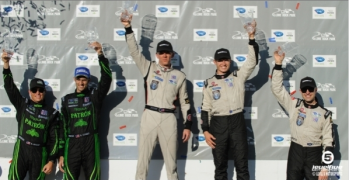 With ambient temperatures over 90 degrees Fahrenheit, nine-time national driving champion Tucker and co-drivers Briscoe and Marino Franchitti had their work cut out for them in the 2-hour and 45-minute scorcher around one of America’s most challenging circuits. However, in typical Level 5 fashion, all three drivers celebrated with a double podium finish, including Tucker, who logged more than two hours of drive time between both cars.

Having started from pole, Tucker led the opening 16 laps before relinquishing the lead to Franchitti in the No. 552 car, who then paced the P2 field until the halfway mark. The Level 5 team principal continued his solid opening drive before handing over controls of the No. 551 car to Briscoe just past the 1-hour mark before stepping into the No. 552 car just 20 minutes later to continue his marathon day.