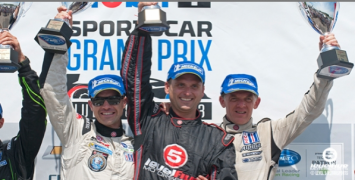 It was strong showing for the No. 551 Siemens/Alpina Watches/Ohiya Casino Resort-sponsored Honda Performance Development ARX-03b race car as it took a 1-lap victory over the P2 competition Sunday, bouncing back from an ill-handling car early in the 2-hour and 45-minute race.

Pole-winner Mike Conway, subbing for Level 5 regular Ryan Briscoe, led from the green flag in the No. 552 car and enjoyed a spirited battle with the No. 01 Extreme Speed Motorsports car of Guy Cosmo. The IZOD IndyCar Series race winner managed to bridge out a 15-second gap before his second pit stop and driver change to Tucker, who drove a steady opening double-stint in the No. 551 HPD.