Another WEC win for Starworks Motorsport 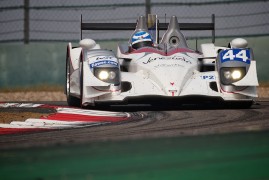 The American Starworks team once again took the P2 class victory in its HPD ARX-03b at the Six Hours of Sao Paulo in Brazil, after a long mid-race battle with the Morgan Nissan of OAK Racing.

The Starworks Motorsport team started from the pole in the strong, 11-car P2 field after an outstanding performance on Friday by Stephane Sarrazin, but the #35 OAK Racing Morgan produced a formidable challenge, as the teams traded the lead throughout the first four hours.

Two hours into the race, Starworks’ Ryan Dalziel and the OAK Morgan challenger put on a thrilling battle for the P2 lead, trading places several times and running side-by-side up the long Sao Paulo front straight for three consecutive laps before Dalziel finally established an advantage.