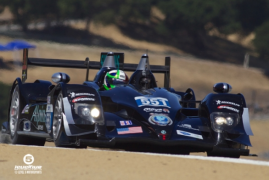 In another dominant performance, Tucker and open-wheel ace Ryan Briscoe drove the No. 551 Siemens/Alpina Watches/Ohiya Casino Resort-sponsored Honda Performance Development ARX-03b to its seventh win of the season and eighth for the Madison, Wis.-based team. It came after an early race battle with the No. 01 Extreme Speed Motorsports car of Anthony Lazzaro, which the Level 5 team principal held off for most of his driving stint before handing over to the Australian ace for the run to the checkered flag.