Home News How it all started

How it all started 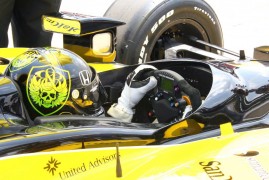 If there’s one project that stands out more than others, it’s one that Performance Data Solutions owner Lee Szczypski worked on prior to the start of his company.

Back in 2008, Lee was working for Luczo Dragon Racing when they decided to install a MoTeC system on their Indy car. It was a big deal at the time because they were the only IndyCar squad to do so. The decision was based on past experience in sports car racing, where most of the current team members had worked.

It was at this time that Lee truly discovered the pleasure that is working with MoTeC. Not only did it cost considerably less than the price point of their competitor, but he found the system to be easy to learn and understand, and highly capable.

With the help of MoTeC’s strong support staff, making the transition was not difficult. In fact, he found that due to MoTeC’s ease of use, after an initial learning curve, support is rarely needed.

For the 2009 season, Lee decided to start from scratch to really maximize the system. He designed the harness from scratch, with the goal of maximizing functionality, and minimizing weight and clutter.

At the heart of the system, was MoTeC’s ACL (Advanced Central Logger). Complimenting that were two SVIMs (Synchronous Versatile Input Modules), which were built into custom-designed carbon fiber boxes. Sensor inputs were routed directly to each of the SVIMs, with one located in the front of the car and one in the rear, significantly reducing the amount of wiring needed. In addition, the harness featured Deutsch Autosport’s most compact connectors extensively– the ASDD and ASU series.

Other features included GPS, telemetry, data-synced video, and a custom CAN based steering wheel with a built in SLM (Shift Light Module). An E816 expander allowed for the input of cockpit based sensors while also controlling the weight jacker.

MoTeC and Performance Data Solutions worked closely with manufacturers and the series to allow more competition on data acquisition products, but the series chose to remain with the status quo and lock down any outside competition for the new DW12 chassis.

Since that time, Performance Data Solutions has been focused more on the high-tech prototype ranks of sports car racing, where teams have much more freedom in choosing which data system best suits their needs and budget.

For photos of this project, visit our Image Gallery.

For more information on what we can do for your project, contact us today.