First and third at Road America for Level 5 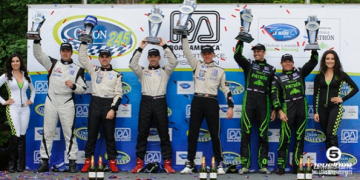 It’s starting to be a really good habit as PDS client Level 5 picked up another class win over the weekend at Road America with the #551 car driven by Scott Tucker and Simon Pagenaud coming in first and the #552 car of Marino Franchitti and Ricardo Gonzalez placing third.

As rain drenched the 4-mike Circuit shortly before the green flag, both cars fought through the challenging conditions early in the 2-hour and 45-minute race. Starting drivers Tucker and Gonzalez, however, had solid opening stints, with the nine-time national driving champion pitting from the lead shortly past the 1 hour mark to hand over to Pagenaud and a change to slick Michelin tires.

The two Level 5 cars used different approaches as the No. 552 HPD of Gonzalez pitted earlier in the opening hour for slicks and took over the lead. The recent Le Mans winner enjoyed a spirited battle with the No. 01 ESM car until his driver change to Franchitti midway through the second hour. Pagenaud then took over point and remained up front until his final stop with 42 minutes to go, which gave the lead back to the polesitting car of Franchitti. However, a fuel-only stop for the Scot in the final 15 minutes saw him relinquish the top spot to the No. 551 car of Pagenaud, who cruised to the checkered flag.