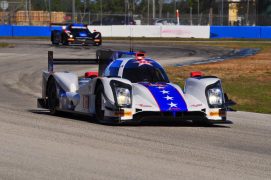 Performance Data Solutions has another busy race season planned for 2016. PDS will be providing at track support to the DragonSpeed LM P2 team. The US-based outfit competes in the European Le Mans Series (ELMS) as well as other international endurance events with their Oreca 05-Nissan.

PDS is also providing support to the F Performance Racing team who will be competing in the IMSA WeatherTech SportsCar Championship.